If 2012’s weddings were anything to go by, American brides take a lot of influence from British wedding trends. However, while 2012 was a year of emulating Kate Middleton’s classic white lace style, 2013 and 2014 are going to be a shift away from it.

According to the Daily Mail, this year’s British weddings are influenced by My Big Fat Gypsy Wedding. With big gowns, and over the top styles, British brides are also opting for purple as the go-to dress color. The color is also popular with celebrity brides, such as Dita Von Teese. 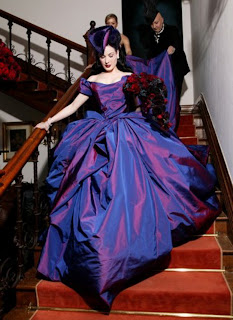 What’s more, this year’s British weddings are also seeing grooms pay a lot more attention to their appearance. Many are dieting before the big day, with a quarter also opting for botox to look their best. They are also investing in whiter teeth before their weddings, with as many as 90% of British grooms having a whitening process or veneers as part of their wedding preparation.

So can we expect the same trends to land on American shores over the next year? Quite possibly. More American brides are also opting away from the white dress and traditional styles influenced by the Royal Wedding for this year’s wedding season.

To find out more about all of the coming year's best wedding trends, come to one of our bridal shows!
Posted by Unknown at 3:00 PM